Made for you by Hand … placed on a classy 2 inch x 2 inch Signature Card from our Studio and nestled in an atractive gift box for the journey to your home.

Like many of us as kids, I started my art collection with Miniature figurines sold as souvenirs at tourist attractions. For me, it was a souvenir and candy stand in the local park and it was my candy money that I used to buy a little glass figurine of a dog with her puppies, packaged in a cotton-filled box shipped all the way across the ocean from an island nation called Japan …. Remember, I was just a kid & I believed somebody far away in a place called Japan had made this little dog just for me.

As the years went by, and as I studied in the North Museum of Natural History on the campus of Franklin and Marshall College in Lancaster, Pennsylvania, I mastered the skills that officially began the collectible Hevener Figurines. Before I knew it (I’m kidding. It took a lot of knocking on doors of gift shops and hand-making figurines for tourists visiting the Pennsylvania Dutch Country) the Hevener Figurines were born. I was a figurine maker with my own studio!

That, of course, was a long time ago, and, today — along with my books and other things I love to make — they call me a pretty good designer. I want to thank all of the people who have collected my work through the years. And, I am writing this note to you from beautiful Brazil, which I visited during my travels and fell in love with so much that we are opening a new studio here.

As an artist, something as small as a Figurine has shown me how great the world is, and I hope you treasure this little Bulldog as much as I love the breed that inspired it.

I just received my very first Hevener dogs, an Apricot poodle pup and a Lakeland Terrier. Zowie. The attention to detail is exquisite! I am completely hooked. 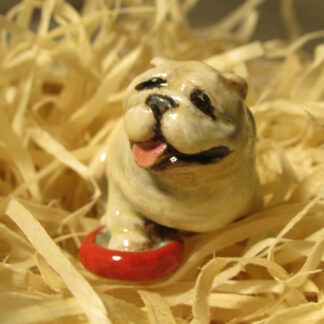