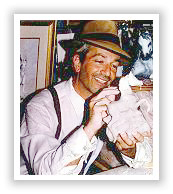 As Wikopedia will tell you, the Hevener collectibles began with a young story-teller making souvenirs for tourists at the farmers markets of Lancaster County, Pennsylvania. The figurines were popular, and the stories began appearing in magazines and novels with readers asking for more.
Most of the characters in our stories are adventurous people who love animals. They have fun, and (just like some of the animals portrayed in the figurines and paintings made in the studio) they often have a streak of mischief.

The studio is located on two farms where the dogs, Arabian horses and other animals which model for our paintings and figurines are born and raised.

In recent years, it was a natural progression for the studio to make its way into television and film and we are always making new figurines and illustrations for readers of the Hevener stories.

Birth of a “Hevener” 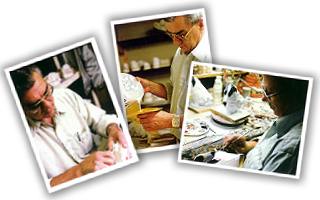 At the age of 5, Ron Hevener bought his first “dog.” A tiny Boxer figurine he fell in love with. It was the beginning of a love affair with art spending many hours sculpting things out of mud or wire and learning to paint.

Today, starting off in local farmers’ markets, selling from his own gallery and now having many distributors, Ron Hevener still creates every piece as if it were his first and has become well known in the collectibles trade. His pieces are treasured by everyone who owns them.

After a design is completed, a latex mold is formed over the original sculpture layer by layer. Then a plastic “mother mold” is made over that to keep the latex mold in place during the pouring. When the mold is sufficiently cured, usually in about two weeks, the first casting is poured and everyone “holds their breath” waiting to see how it comes out.

The castings are now ready to be painted. They are base coated, then air brushed with colors and patterns, each one slightly different. Some are custom painted from photographs to match a specific pet. The finish touches are then done with a brush to create the masterpiece.

They are then glazed with multiple coats of clear lacquer and allowed to cure for about a week. With proper care the figurines will last for many years and have earned the name -Hevener.

The three Greyhound figurines are beautiful - and they look exactly like our Greys. Thank you for your fine work!

We received our order today. They are beautiful. Thank you so much for making them so realistic. The pose on the figurines is the one we see our dogs in most of the time. Great service and high quality product. I am very happy. Thanks.

Thank you for the wonderful greyhound! I received her Wednesday in perfect condition. It was wonderful! Thanks so much for such a wonderful piece and such fast turn around. The sculpture will be a treasured piece for many years to come!

I received my figurine a few days ago and I just wanted to say how delighted I am with the workmanship. The light brindle color I ordered was just perfect with that of my little girl. Thank you so much.

I received the custom painted dachshund figurine today. It is truly remarkable! I really did not know what to expect. It is truly magnificent! I am so very happy With it! I cant thank you enough.