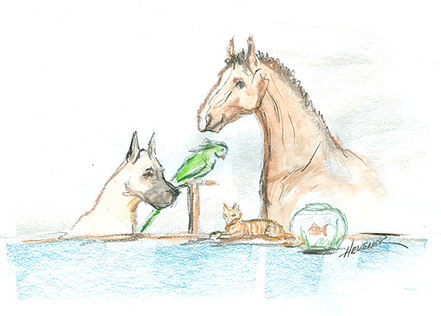 If Animals Could Talk

If Animals Could Talk

Winter’s aching fingers pinched my ears as I hurried to the barn. My toes, cozy and padded by woolen socks in a new pair of work boots, bent with each chunk of frozen mud beneath them and sent fluffy, mindless snow bouncing away on my path. A shepherd amid his flock of sheep, or a farmer in a cloud of white chickens, might have centered himself in such a universe. I was on my way to the horses that had become the center of my life.

Over the years, I had studied our purpose in the big picture. I had studied yoga and philosophy and had enjoyed the teachings of many interesting thinkers. I had traveled with them on their lecture circuits and to their book signings. I had been a guest in their homes, at their hotels and at their universities. Authors of books such as “Cosmic Consciousness” … “As a Man Thinketh” and “The Magic of Believing” became personal acquaintances or intellectual friends living through their works in my private library. Walter Russell, HH Swami Rama, Col. Arthur Burkes, and the like, were writers and observers of thought whom I was lucky enough to know and ask almost anything I could imagine. Thinking back, I usually wanted to know where I belonged in the grand scheme of things … and what meaningful purpose I was living for. I stopped asking those questions as time went by and life took its course.

As I approached the barn, the horses sensed my presence and they whinnied to me in their way of speaking. “Hurry! Where have you been!” At their urgency, I pulled aside the sliding door and flicked on the lights revealing a wide, clean-swept aisle between twenty box stalls on either side. “We missed you!” the horses seemed to say, as satisfied barn cats turned their attention away from birds tweeting among the rafters and the reassuring tones of National Public Radio filled the air.

The horses, the cats and the birds were experts when it came to public opinion. I imagined them as erudite commentators expressing their opinions on any of the various shows offered by NPR. Entering the feed room, pulling loose the string tab on a bag of pellet-ed grain and pouring it into a clean wheel barrel, I considered these things ….

MR. EDD: (Clearing his throat) Ahem! Well! What I mean is, never before in the history of animal-kind have things been more exciting!

DIANE: Exciting? What do you mean … by … exciting?

MR. EDD: Well! Well, just take the recent activity on Wall Street, for instance. The price of grain per bag was falling, so we stepped in and bought. We bought heavily and – next thing you know – the price of grain was going up! Our bankers were pretty happy about that!

DIANE: I see … You’re speaking about the WBS .. . (sound of rustling paper as she checks her notes) …. For our listeners out there, W.B.S. stands for Whoppin-big Banking System. We … uh … contacted the animal branch of the W.B.S. for our show this morning, but they declined to make any comments.

MR. EDD: Well, that’s understandable. They like to stay behind the scenes.

DIANE: Let’s turn our attention to the recent merger of Cattle, Amphibians and Rodents which shook up stock exchanges in Tokyo, New York and London. What – exactly – were the reasons for all of this? What happened?

MR. BULL: (leaning closer to the microphone) May I address that one?

MR. BULL: A lot of investors were leery of the merger –

DIANE: In the media, it was rather hostile, wasn’t it?

MR. BULL: Hostile in a business sense? A hostile take-over?

DIANE: Precisely. (brushing away a few crumbs from a blueberry muffin and reaching for a coffee mug) … When thousands of mice and rats started marching in the streets and refusing to clean up restaurant kitchens –

DIANE: And what do YOU have to say about that, Mr., uh, Whiskers? You’ve been rather quiet, sitting over there.

MR. WHISKERS: Independent thought is the key to freedom. Rioting in the streets depends on where you’re coming from and where you want to go.

DIANE: I see … And you, Ms. Feathers? What is the position of The Bird Corporation on all this … hmmm?

MS. BIRD: As my late friend, Lady, would have said to me, when we spoke in her beautiful garden at the White House, ‘Honey …’ – that was her pet name for me: Honey – ‘sometimes you just have to sing for your supper.’

MR. BULL (To Ms. Feathers): Mice and rats had been chewing holes in feed bags across the world – they had been doing it for years! The cost to investors was incalculable – not to mention the hunger for masses of baby calves in North Dakota!

MS. FEATHERS (fluttering out of reach and perching on a lampshade): Perhaps our organizations have a different point of view when it comes to that, sir!

MT. EDD: Ladies! Gentlemen! Control yourselves! Pull the reins in on this! Unity is what our Federation is about. Unity!

MR. FINN: (pounding on the sides of his fish bowl) Let me out of here! We must join forces and break down the barriers of government control to reach our full potential!

MR. DANE (suddenly barking orders): Shut up! LISTEN to yourselves! You sound like the English Parliament – yapping and stinging and biting like you don’t have any sense! Is this how you want the world to see us? Is that how you see yourselves?

DIANE (Slowly): Perhaps we should ask one who has some experience with peaceful co-existence in such matters …. (glances around, puzzled) … Ms. Yeti?

MR. WHISKERS: I think the representative for the World Corporation of Mysterious Species has just left the room.

And so it went in the imagination of an animal lover feeding horses, dogs, cats and chickens on a snowy day not so long ago. Would life ever make any sense? Not very likely. As I walked away from the barn, lucky sparrows fluttered in the rafters, dogs outside barked for no apparent reason at all, and horses tried saying what was on their minds. Winter’s aching fingers pinched my stinging ears … and the cadence of the radio played on as if animals could talk.