“Fate of the Stallion!” A Family-rated novel by Ron Hevener

Dear Readers, Mr. Hevener is a recognized, award-winning author specializing in stories about romantic, sentimental, adventurous people who love their animals. Most of his stories are set in the glamorous world of dog shows, horse shows and racing where he competes with the horses and dogs he raises and portrays in his work as a designer.

Not since the popular Black Stallion adventures of Walter Farley has an Arabian racehorse burst onto the American book scene … and this one’s for real. Based on the true story of a racing stallion saved from slaughter.

Based on the true story of an exotic Arabian stallion lost from the public limelight and the people who found him. On his road back to glory, he inspired them — showed them how to be strong —and changed their lives forever …

His name was Nahgua … “Lover of the desert winds” . . . . He was the kind of horse DREAMS are made of and people FIGHT for!

A classic Family-Rated story of horse lovers bringing a stallion back to glory and changing their lives forever.

They're here and they're GORGEOUS! Thanks so much 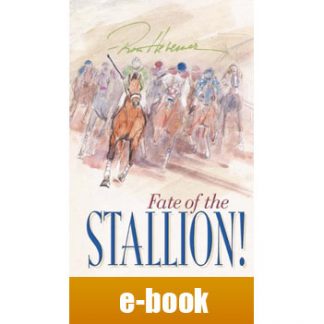 You're viewing: “Fate of the Stallion!” A Family-rated novel by Ron Hevener $4.99
Buy now